I. ROOTS OF VOODOO IN AFRICA

II. DESTRUCTION OF AFRICA, VOODOO AND THE BLACK MASS

III. MACANDAL AND A NEW AFRICA

I. Voodoo is thought to be emblematic of indigenous tribal ways of Africans. Displays of orgiastic pleasure, animal sacrifices, magical and sometimes vengeful rites give the impression to some that Africans truly have "heathen" roots. While "Animism," or religions based on totems in nature, was practiced by virtually every indigenous tribe throughout the world before colonial invasions, Voodoo was not. Voodoo began, not surprisingly, at the same time the Portuguese assaulted Africa in the 15th Century. It was far different than animist religious traditions and is almost completely unique to Haiti and the roots of most Haitians who came from Benin (Dahomey and the Congo, Africa). Voodoo had less to do with African tribal religion and more to do with Catholic rites and slavery.
In my research nowhere could I find any evidence that Macandal practiced or believed in Voodoo. Macandal was not a houngan or Voodoo Priest, as some modern Haitians claim. In fact he seemed to try to separate himself from the practice. Some Haitians believe Macandal was evil, and characterize him as a powerful priest of Voodoo. Those who see Macandal as a brilliant revolutionary believe his religious roots were Muslim and that he was baptised and learned about Christianity after being taken as a slave (Christian baptism was compulsory for newly arriving slaves). There is no evidence that Macandal remained a Muslim, practiced Voodoo or became a Christian. However using his incredibly keen intellect he pierced the illusion of heavenly sanction for slavery by Europeans and Muslims. He called himself "The Black Messiah" to preempt the theology of Africans, Muslims and Christians and claim he had the authority to end slavery.
Macandal understood the roots of both Muslim and Christian slavery. My thesis is that Africans have been embroiled in continuing self-destruction because of myths propagated by religious writers and historians who teach that the Blacks themselves were the original slave traders. Voodoo is believed to mirror native African life-ways. However the start of the slave trade was the start of Voodoo and was the beginning of hatred between African tribes. This hatred still exists today in Africa and Haiti and is at the root of all de-stabilization in Africa and other Black countries where civil war is a constant fact of life. Africans blamed each other for their plight during the slave trade. I proposed that Africans, Blacks worldwide and most of the rest of humanity believe the same thing that most historians teach (black and white); that Africans themselves were responsible for the destruction of Africa.
Prior to the mid-Atlantic slave trade, travelers and traders passing through many parts of the continent wrote of harmonious relationships between tribes and of safety when traveling. Such a writer was Ibn Battuta of Algiers who traveled throughout much of West and East Africa during the 14th Century, before the slave trade started. The beginning of the end for Africa was also the beginning of the practice of Voodoo in Africa and thus to me it is proof of where the blame for African destruction should be aimed. The symbols of Voodoo are unmistakably a mixture of Catholic and Animist icons. There is also a distinctly Dahomean connection in Voodoo and since Dahomey was the first place in Africa where European slavers captured slaves it leads me to conclude that Africans changed in behavior dramatically at that time because of coercion and not cooperation with slavers. That the Portuguese were able to get Dahomean Africans to go to war against other tribes for slaves in itself indicates some kind of powerful catalyst. From the little history that is known from before the slave trade and based on the traditional practices of indigenous people worldwide, tribal skirmishes before the Portuguese involved short battles with few, if any, deaths. The cause of these skirmishes was usually disputed territory or females and the losers submitted to being servants of the victors for a limited period and were well-treated. I propose that practices in Africa were similar to approaches of colonialists in the Americas. However the first colonial slavers in Africa, the Portuguese, may have used even more extraordinary tactics to change this ancient dynamic and thus disassemble Africa for hundreds of years up through the present. Additionally, both Muslim and Christian historical roots indicate support of many kinds of slavery.
II. After Dahomeans attacked, slaughtered and captured nearby tribes, other natives could only follow suit or be themselves taken, thus the dominos fell rapidly. It has been suggested that besides the first ships carrying cannons and guns, which severely traumatized African natives, the Portuguese used a mixture of alcohol and gun powder as a drink, which made natives violent, causing a reaction similar to the drug "Angel Dust." Some teachers and students in Haiti believed that Haitian Voodoo was originally a perversion of the Catholic Mass combined with the "Black Mass" and that this ceremony arose from the Europeans forcing natives to drink the potent alcohol/gun powder mixture. This mixture caused natives to enter a frenzied "trance state" similar to that achieved in Voodoo ceremonies. In this state uncharacteristically inhumane practices can be accepted. Currently, Voodoo priests use a 180 proof alcohol drink made from cane sugar during Voodoo rites. The word 'voodoo' itself  is a corruption of the word 'vodun,' a word that means 'god' or 'spirit' in the West African Fon language. The name for God in the religion is rooted in the French words 'Bon Dieu' for "Good God," and it is believed that the "Black Mass" was heavily practiced in France. The "Loa" or Voodoo Spirits are pictured as Catholic saints and other Voodoo symbols may link to slave ships and Church power. 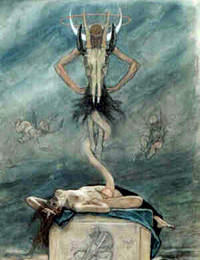 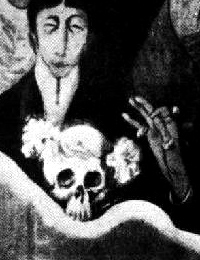 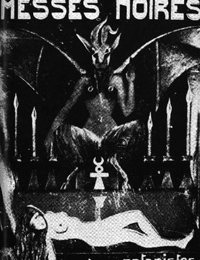 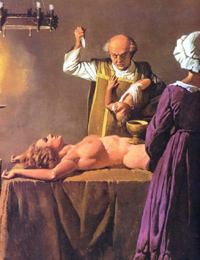 Black Mass rituals are thought to have included influences from Islam, Judaism and Satan worship. As in the case of the Knights Templar some of whom are thought to have converted to Islam and pagan traditions and practiced the "Black Mass" after rejection by the Church, there is a consistently sexual theme in Black Mass rites and sexual acts, sacrifices and cannibalism have been practiced. In my travels throughout Haiti, the Rada Voodoo rites had a strong sexual element and Voodoo priests are known to practice "Black Magic" and spell-casting. Animal sacrifices are a prominent part of Haitian Voodoo ceremonies.

Little can actually be concluded from the above except that there is a strongly syncretic amalgam of Church and anti-Church religious symbolism in modern Voodoo and Voodoo did not exist prior to the Portuguese invasion. I contend it is an important example of the stark and wholesale change Africans underwent after the slave trade began..Macandal may have known of true African history being from a reclusive Muslim tribe and therefore avoided Voodoo. I contend that slavery was endemic and destined to last as long as Africans blamed each other for their plight. At least temporarily, Macandal convinced slaves that slavery was a perversion of Christian ideology and Colonialist Slavers were themselves anti-Christ's doomed to fail. Thus Macandal then labeled himself "The Black Messiah" I believe, in an effort to re-cast Christian ideology back to its origins and convince Africans that they were worthy of freedom.
III. Macandal; Changing the world and envisioning a new Africa
Macandal may very well represent an African Renaissance if his heroism and vision can be re-engendered. Just as the African Renaissance of the Middle Ages was destroyed by colonial greed and religious warfare, Macandal can inspire the world to see a new vision; building up people through education and understanding and dissolving political and religious divisiveness. Macandal is someone worthy of admiration and inspiration. His story is a reminder that individuals can do remarkable things to change the world if they decline to accept popular ideology and envision new standards of equality and respect. More than any other lesson Macandal's story represents the power of education. Macandal believed that education, freedom and prosperity was an innate right. He inspired the downtrodden with conviction and will but he did not just make war. He prioritized education, learned many languages, became skilled at organization, united tribes of Maroons previously loathe to associate with one another and built bridges among slave communities.
Did Macandal hate the whites? What we know is that he fought the slave system, including both French and black overseers who served it and fought against freedom for all. In fact, one of his closest allies and supporters was a French Jesuit Priest named Father Duquesnoy.
It is my hope that his story will help change the world by altering our view of history, race and what should now be done to right past wrongs.
www.macandal.org

Macandal, Makendal, Mackendal, Mackandal or Makandal fought both blacks and whites who supported slavery and is a testament to the power of education, eliminating racial, religious and political alliances in favor of freedom and brotherhood for all.